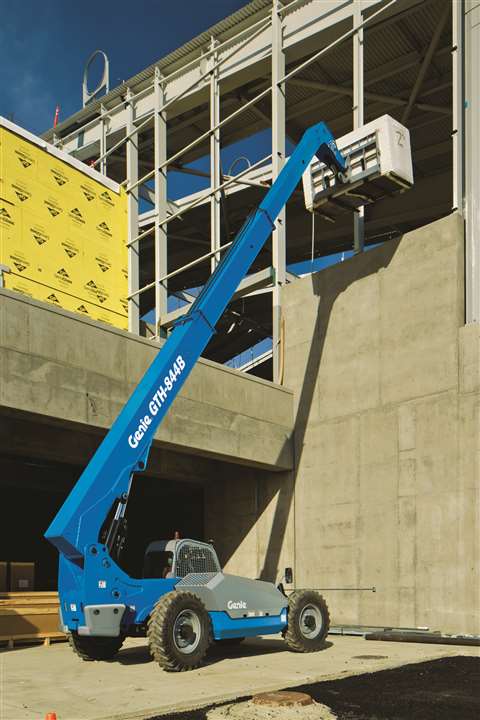 Terex Aerial Work Platforms (AWP) will unveil a new telehandler prototype at The Rental Show, Feb. 5-8, in New Orleans, LA. The 8,000-pound capacity Genie GTH-844B will be available for purchase in the fourth quarter of 2012.

The GTH-844B will replace the existing 844 model and features a Tier 4i engine, improved visibility due to engine relocation from rear-mount to right-side-mount, a narrowed width of 96 inches from 102 inches and a completely redesigned operator's cab.

"Virtually everything from stem to stern is new on this machine," said Scott Krieger, Terex AWP senior product manager of telehandlers.

"Both are high quality and both are going to get the job done," Krieger said.

Pricing for the machine could be a bit of a "sticker shock" for some customers, Krieger said.

"While we have not finalized our pricing, the engine OEMs are telling us we're about a $4,000 delta from the Tier 3 engine," he said. "This is obviously very substantial. It's hard to pass this type of price increase on our customers, but our customers are well-aware this is coming."

Terex AWP also wanted to improve the environment for the operator by introducing a totally new control station. The GTH-844B will feature a tilt steering wheel, a lowered dash for better visibility, new gauge and switch packages and updated single-lever joystick control.

"Visibility is a huge new aspect," Krieger said. "By changing the location of the engine and putting it on the side (versus the back), the visibility is greatly enhanced."

Terex AWP says the narrowed-down machine will allow customers to get through narrow doorways and the company has also optimized the geometry of the machine's steering by changing to Carraro axles. "It's a well-balanced machine," Krieger said. "We've got a great package here; it's a tremendous amount of new content and new features and benefits that customers and operators will find great benefits to."

The telehandler will be a "Western hemisphere" machine, Krieger said, which means it will be sold in both North and South American markets.