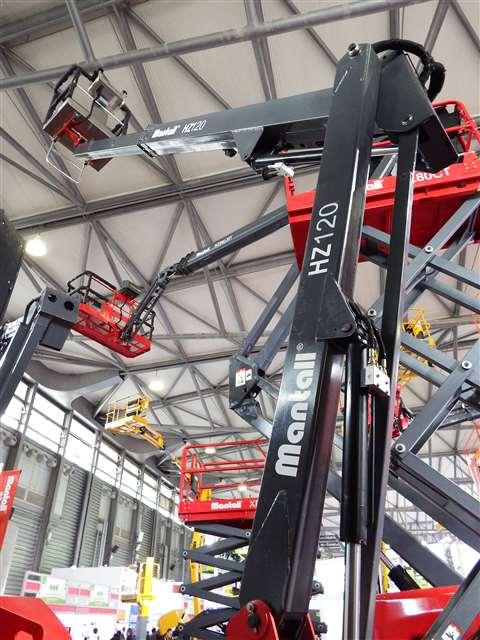 Mantall is introducing a range of new products amid a challenging time for access manufacturers based in China.

Shirley Li, co-owner of Mantall said, “It is a tough time. But Mantall has been here for a long time and we have loyal customers.”

The introduction of a large number of new access manufacturers in the Chinese market, including longstanding general construction producers like XCMG, LGMG, LiuGong and Zoomlion, that have set up their MEWP divisions within the last two years, could be an advantage, rather than a hindrance, to established companies like Mantall, said Li. ”It is good news in a way. They may help educate the market about MEWPs and help expand it. There is growth in the market and enough space for everyone. We have developed our knowledge of access products over a good number of years, rather than coming in recently.”

Mantall launched three new products on its stand at Apex Asia, including it first electric boom, the 12m working height HZ120ED,  powered by lead acid batteries. There was also a new 16m bi-energy articulating boom, the HZ160JBI, with diesal and lead acid battery power, as well as an 18m articulating model, the HZ180JRT and its larger sibling, the 26m HZ60JRT.

Li said the company already offers Lithium batteries as an option on its smaller scissors. “There will be more requirements for electric and bi-energy in the future.”

The company is planning to launch 18m, 20m and 26m bi-energy booms soon, with thre next step being bi-energy RT scissors.

To accommodate the new products, the company is expanding its existing premises by 130% and will open the new production facilities in March to April next year. Nevertheless, the company is experiencing the same fluctuating market conditions as the rest of the industry. ”The beginning of this year was very good but things have slowed globally since the middle of the year due to the trade war, the slowing economy and political uncertainty,” said Li.