Ben Morton, owner of Ben Morton Builder, LLC, was recently called upon to help with work on a 20,000-square-foot home building project in Maine. 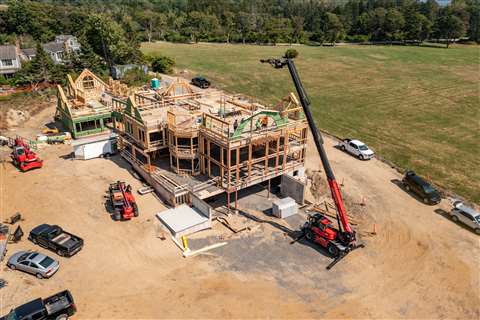 “This is a large residential house. It has 200 pieces of steel, which is what makes this unique,” explained Morton, who is known for his track record of successfully complete framing on complex styles of home design. “It’s a three-story house. And most houses have one or two pieces of steel. We’re able to deal with both blending wood with steel, real architecture, lots of interesting roof lines, with real heavy structure.”

Framing the house included handling and setting the 200 steel pieces, as well as many of the other materials and trusses that make up the profile of the impressive coastal home. While some contractors would have hired out a crane service, or relied on a consistently moving series of telehandlers and lifts, Morton instead opted for a Manitou MRT 2260 Vision+ rotating telhandler.

“The MRT 2260 [is a] new model with the new cab,” said Morton. “I bought it because I was really impressed with the new design. And I really thought that having the whole glass cab, and being able to see everywhere would be convenient. What I didn’t realize when I bought it is how little time I’ll spend in the cab. It’s a beautiful cab, but we only use the remote. I mean, we’re 98 percent outside of the machine.

“The MRT allows me to use the machine throughout the entire job. It starts off as a forklift, then morphs to a crane, and finishes the job as a basket lift. The only time we’re in the machine is to move it. And once it’s set up, we’re working outside with the remote all the time. It allows me to follow the end of the boom around and be at the critical point throughout the entire process. Whether I’m scooping something with a fork, I’m right there, watching. Or I’m setting something up in the air, lifting a wall, I’m right there.”

When speaking about the MRT, Morton said its controls, specifically the remote, are a major factor for his crew’s success. 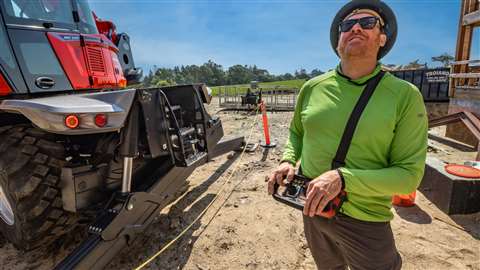 The remote control function of Manitou’s rotating telehandlers was a major plus for Ben Morton and his crew. (Photo: Manitou)

“Four of us went through crane rigging and crane signaling certification, but we don’t need it,” said Morton. “ We need the rigging. But we don’t signal. We talk. And we talk in a quiet voice, because we’re right here. We’re not even yelling. So, the magic with the machine is the remote. Being able to walk around, being able to physically see what you’re lifting from any angle, and not have to worry about doing things blind. What I can’t describe well enough is how Zen-like it is, how calm and how comfortable it is, versus operating from the cab. Just being able to either omit the communication or being able to do it verbally close at hand is amazing.”

Another big advantage was the ability to use the broad spectrum of attachments that are compatible with the machine, as well as his other Manitou equipment.

“One of the great things about Manitou is that the attachments physically fit on all the machines — they have the same connection point,” said Morton. “So that means that I can use my Manitou MT 1840 and I can move all the attachments around and bring them to the roto. So, the benefit is I can keep the roto stationary, and I feed the roto with my straight-boom forklift. It saves me the time of setup. I don’t need to move it, because I feed that machine with my other straight boom forklift, and I set everything up within the radius of the swing of the boom.”

Morton sees that ability to keep the rotating telehandler in a stationary position throughout the build as a major advantage. He sees it as a time savings, and also as a way for his team to concentrate on critical tasks without losing energy focusing on machine moves or other distractions around the site. Maybe most importantly: it increases safety by minimizing the amount of walking each employee does around the site and reduces the amount of actual physical lifting and labor they are doing.

“Keeping the machine central, I’m able to use it as a hub to feed everybody” he says. “[We can] bring steel up to the top or unload a truck, bring steel down from the top floor, bring trash from the side of the house over to the dumpster, bring plywood up to the second floor. What I do is just stroll around the site and see what people need and where they need it. And my goal is to make sure that nobody’s carrying lumber around. Right? I want everybody doing the best thing they can do, and they don’t need to be carrying stuff, we’ve got equipment for that. They need to be problem solving. They need to be doing amazing, beautiful work. And that does not involve carrying lumber up a staircase, or trash to the trash can, or you name it.”

“And It’s just safer when the machine’s not moving. It allows us to take more care with setting up a nice, safe work area, we can rope it off. We can make sure it’s really nice and level, and it’s way less damaging to the site. You’re not driving constantly, you’re not making ruts, you’re not going through the mud, you’re not damaging the tar. You’re just stationary. It’s a big difference.”

Investment versus cost savings is a critical factor in decision making. Morton takes a practical perspective on how his decisions and his approach to framing affects his bottom line — and how that approach has freed up his team members to be even more productive and valuable to the process.

“When I think of how much money I would have in crane time, when I think of how much labor I would have trying to physically lift all these boards, move them around when I think of trying to do it with my regular forklift, setting each piece, the amount of driving in and out, it’s just a no-brainer [to use this rotating telehandler,]” said Morton. “It makes all the sense in the world. What I’ve done is, I haven’t replaced anybody. I haven’t downsized. I have pivoted their roles to something more important than just carrying materials. So now they’re creating.”