Olive, speaking to ALH after the company’s massive, mid-February online Orlando auction, said Ritchie Bros. is experiencing a surge in demand through all of its sales channels – and 2021 is already proving itself to be another record-breaking year.

“Early 2021 results show no signs of slowing demand,” Olive says. “Our customers are watch listing items at twice the rate they were previously, and we are continually breaking bidder registration records. In February alone we saw a 68 percent increase in bidder registrations for our Houston auction, while our Orlando and Edmonton auctions saw bidders jump 26 percent and 50 percent respectively.

Last year, when Covid-19 started to unravel the world, Ritchie Bros., like most of us, pivoted.

“Back in March 2020, with the outbreak of Covid-19 in North America, we made the switch to 100 percent online bidding to help keep our customers and employees safe,” Olive says. “Since we’ve made the switch, we’ve seen unprecedented demand and have broken multiple company records.”

Take Ritchie’s Orlando event, for instance. The five-day auction attracted 1,000 consignors and 22,700 bidders from more than 80 countries. All told, more than 12,000 items were sold for $191 million at the six-day event.

“Pricing for lifting and material handling equipment, according to our most recent Used Equipment Market Trends report, has increased 9 percent in the U.S. for the three months ending Feb. 2021, compared to the same time period last year.”

“Even with a health and economic crisis, our customers are still working – and so are we,” Olive notes. “Meanwhile, OEM production is down, turning more people to the used market. In 2020, and now in early 2021, we are seeing an uptick of end-users purchasing at auctions as prices continue to trend upwards. Demand is strong and supply is tight.”

The writing is on the wall: People are still buying used construction equipment and, interestingly, the prices for used equipment have held steady.

Online bidding isn’t unfamiliar territory for Ritchie Bros.; the company has held online auctions for some time now. But with the global pandemic forcing people to shelter in place, Ritchie Bros. knew it had to change its route to market for its annual Orlando event.

“With Covid-safety, our focus and a wealth of technology in our toolkit, we conducted Orlando as a hybrid-style event with equipment stored onsite but online-only bidding,” Olive explains.

Over the years, online participation has grown quarter-after-quarter for the auction company; prior to Covid-19’s impact, approximately 75 percent of buyers at Ritchie Bros. auctions were online.

In late 2020, Karl Werner, president, international, Ritchie Bros., told sister publication International Construction that when Covid-19 hit, “Over a weekend, we came up with this plan to say to customers, ‘Look, you can come in and inspect the equipment where it’s approved by the authorities, but we will limit the number of people in the yards at one time and practice social distancing.”

Slightly different versions of online auctions have taken place in North America, Europe and Asia-Pacific to cater for different market requirements, but the key point is that business has been able to carry on.

“The most intriguing scenario now that we’re seeing is that demand is actually fairly steady globally. We’re seeing pricing holding up – we haven’t seen any price erosion to speak of,” says Werner. He attributes a lot of this to the uncertainties that the global pandemic has brought in its wake.

“There’s still a lot of business going on in the world, but there’s also uncertainties. If you have a project that’s coming up are you going to go out and buy new machines that you’re going to be paying for over the next three years? Or are you going to buy a used machine, get your project done, and then liquidated after if there’s no business coming down the pipeline for you? The used market, in times like this, actually flourishes a bit. We’re also seeing that with dealers, they are confirming that new sales are down but used is still strong.”

Ritchie Bros. has been operating for more than 60 years and it sells all types of construction equipment, but according to Werner, it’s smaller machines – mini excavators, scissor lifts and compact loaders – that are seeing the biggest demand and growth. Another driver has been emissions regulations; whenever countries raise the levels of emissions regulations, the market for older and non-compliant machines gets smaller and smaller.

“Every time a country raises their emissions requirements it shrinks down the area where those older used machines can be sold,” Werner says. “Right now, a bigger market for lower tier machines is countries in Africa, Middle East and some of Southeast Asia.”

Another issue is related to the higher levels of technology on newer machines. For example, even if a contractor based in another country wanted the highest specification wheeled loader available, it isn’t much good if the right spare part can’t be delivered to them quickly in the case of a breakdown or the right fuel isn’t available to run it.

Staying on the theme of technology, and Werner says that it is now a ‘given,’ for buyers in developed countries to want construction equipment with inbuilt technology and it is a trend that is accelerating. He adds that, “Technology is just transforming the industry itself, it is truly amazing.”

If technology is a must for some buyers, then what else are they looking for?

An experienced hand, Werner refuses to be drawn on the question of which OEM’s equipment is viewed as more valuable than others by buyers, but does say that those attending auctions, be it in person or virtually, are more savvy than ever before.

“Today’s buyers are way more educated and informed. They look at total cost of ownership, so that means all your maintenance costs, your ownership costs and how much the machine is going to be worth in five years,” he says. 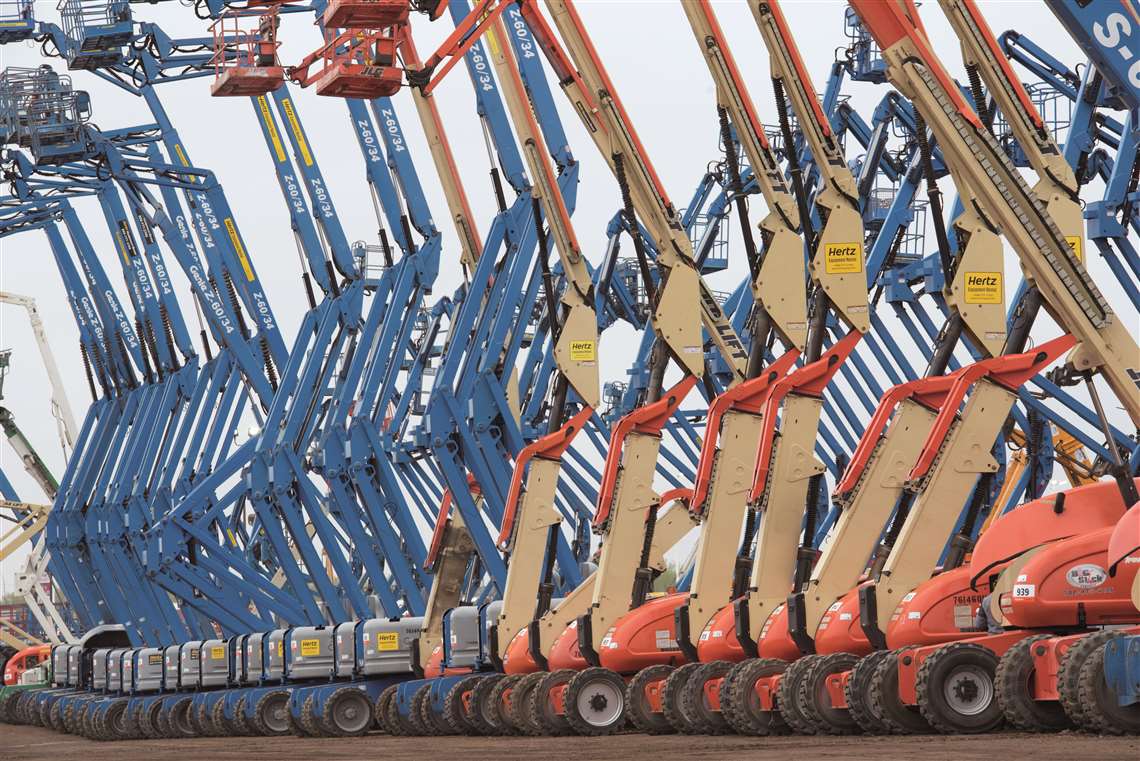 “If you’re buying machine X and you’re running it, the fuel cost is X, the maintenance cost is Y and at the end of five years, you’re going to sell it for, say, 40 percent of what your new cost was. Machine Y has virtually the same operating cost, but you’re going to sell it for 50 percent of your original equipment costs. Those are factors that educated buyers are taking into consideration.”

While a lot of businesses have been suffering recently, Werner makes the point that he does not think that the construction industry has been anywhere near as badly impacted as it was in the financial crash of 2008-2009.

The company produces a used equipment market survey report and in its most recent release, it said for the three months ending to February, prices for used heavy equipment increased 5 percent compared to the same time frame last year. Of particular note, boom lift sales in 2020 saw significantly more volume sold (approximately 35 percent more) than in 2019.

While some companies have fared better than others in this ‘new normal’ brought on by Covid-19, there is no doubt that the way that businesses operate will be changed by the impact of the pandemic. There was already a trend for meetings to take place remotely rather than in person, for people to work at home rather than out of the office and to use technology to improve efficiencies. In a world where social distancing is necessary these trends have hit light-speed.

Werner comments that, “I’ve been telling our team that if there was a trend pre-Covid, this has accelerated that from 50 kilometers an hour to 150. Online mobile and technology was trending before, now it’s full speed. We’re not going back. There’s going to be new models that come out of this, the way people do business.

A lot of eyes have been opened.”

For its full year results to Dec. 31, 2020, Ritchie Brothers saw a 5 percent increase in gross transaction volume to $1.4 billion, and service revenue was up 8 percent to $232 million. For the full year, the company’s total revenues increased 4 percent to $1.4 billion as compared to 2019.

Speaking during an investors call on Feb. 19, Ann Fandozzi, CEO of Ritchie Bros., said demand and pricing strength has continued despite some market uncertainties.

“We know the used equipment market is tight right now with very low new and used inventory levels,” Fandozzi said. “This is a challenge we continue to face in the first quarter. And while we can’t control the broader environment, we are obsessed with driving execution for the benefit of our customers, for our employees and for all of you.”

The first few months of 2021 have had their challenges, including a tight equipment market and U.S. cosigners who are taking a ‘wait and see’ approach to better assess new equipment availability and used equipment prices.

“Overall, the headwinds on equipment supply that we saw in the fourth quarter continue in the first quarter,” Fandozzi said. “Our priority remains on keeping the health and safety of our employees at the forefront while focusing on execution. The key execution priorities are: Growth in a constrained environment, keeping tight controls on costs and focusing on our True North improving our customers’ experience. We continue to see upside opportunities balanced by uncertainty and risks as well. We see consigners that are focused on cash flow and inventory management, which should continue to drive liquidity needs.”n