It is with enormous regret that we report the passing of Amilcare Merlo, President and Founder of Merlo Group, one of the pioneers in the development of telehandlers for both construction and agriculture. 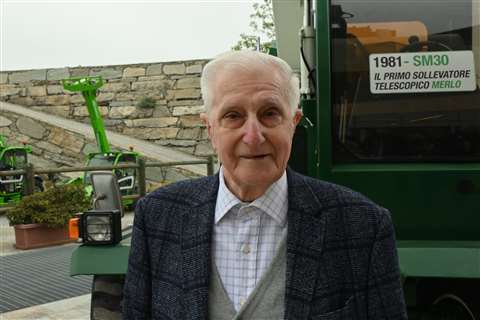 Amilcare Merlo in front of his first telehandler, the SM30, at the Merlo factory in Cuneo, Italy earlier this year. (Photo: Merlo)

Born in 1934 on the outskirts of Cuneo, Italy, Merlo founded the company in 1964 and built it to become a major player in the international market, with six subsidiaries, more than 50 importers, and 600 dealers worldwide.

His focus on the construction industry had started from a young age. The time he spent as a 14-year-old working in his father Giuseppe’s blacksmith workshop is said to have inspired him to open the first Merlo production facility alongside his sister Natalina.

Over the next 58 years, the company continued to expand, and currently has more than 600 dealers in 80 countries, employing more than 1,300 people.

At the start, the company focused on site dumpers and off-road concrete mixers. It manufactured its first telehandler in 1981. Its current products include telehandlers, tractors, concrete mixers and tracked dumpers.

One thing that didn’t change was the roots of the company, which remained in Cuneo. For this, he was awarded honorary citizenship of the city in 2015, alongside his sister. Just one year before, the company had been named in the Italian register of historic companies.

The Mayor of Cuneo, Patrizia Manassero expressed her condolences to the Merlo family; “It is a great loss for everyone. Amilcare Merlo was a very precious figure, together with his family, for our province.”

Shaun Groom, general manager of Merlo UK Ltd, added; “Amilcare Merlo was a truly inspiring figure for anyone that had the pleasure to meet him. All of us in the Merlo UK team are truly saddened by his passing.

“I know I can say that his wisdom, wit, determination and expertise will be missed by all.”

KHL Group and the staff of its magazines including Access International and International Rental News send their sincere condolences to the family and friends of Amilcare Merlo.