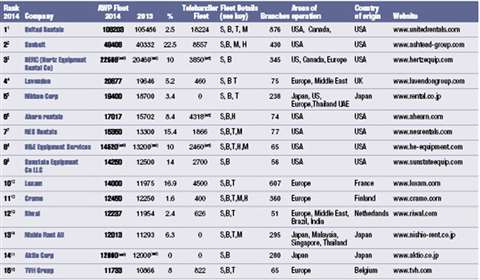 The prevailing mood of this year’s ACCESS50 listing of the world’s biggest access equipment rental companies is a positive one, with growth across much of the table.

This year the ACCESS50, which is measured by fleet size, includes telehandlers for the first time. This figure has been separated from the aerial work platform fleet sizes to ensure an accurate comparison to last year’s figure and to maintain the longstanding AWP listing.

United Rentals and Sunbelt have the biggest telehandler fleet sizes, taking first and second place, respectively. This matches their customary positions in the main AWP table and cements their claims as the dominant forces in the rental market.

European companies do feature in the list however, with Loxam bucking the trend and coming in third with its fleet of 4500 telehandlers. In the AWP list Loxam is in tenth place - two places up from last year - which demonstrates AWP fleet sizes and telehandler figures do not always correlate. Some companies with large AWP fleets have few or no telehandlers, notably those based in Japan. Nikken Corp, for example, is fifth in the AWP list but has zero telehandlers. Sticking with companies in Asia; Galmon in Singapore and a new entry AJ Networks in Korea, both have thousands in their AWP fleet but also have no telehandlers.

Turning our attention to the main AWP list, it’s the USA-based companies that dominate the top 10, with the exception of European major Lavendon group in fourth place, the previously mentioned Nikken Corp, in fifth, and Loxam, which sneaks in at tenth. European companies come in to their own in the second half of the top 20, taking a majority of places in this part of the table.

There are a number of new entries but they mostly appear at the bottom of the table. Blue Line Rental is an exception in 17th position with its fleet of 10978 AWPs.

See the full table in July/August 2014 issue of AI, starting on page 23, which can be downloaded from the KHL website.