AI provides its annual round-up of the expectations of the access industry for the years ahead. 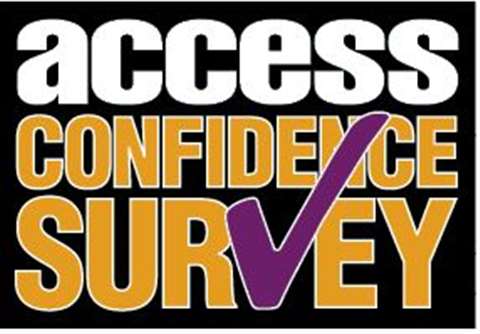 There is a cautious approach to the coming year in the latest edition of AI‘s Access Confidence Survey, from companies in the access rental and manufacturing sectors.

For a start, the Confidence Index, in which participants are asked how they rate opportunities for their business over the next five years out of a maximum score of 100, shows an average of 64.88 this year, compared to 66.86 in last year’s survey.

Looking back at recent years, the 2021 Confidence Index was almost at its highest level since the period leading up to the financial crash in 2008.

Part of the reason for this is that time last year, the direct day-to-day impact of the Covid-19 pandemic had eased significantly in many parts of the world.

This included North America and Europe – home to many of the access equipment manufacturers and major rental companies. 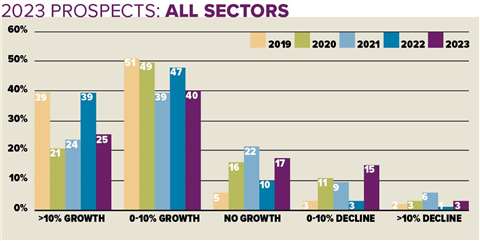 17% of all respondents are expecting no growth, compared to 10% of those that responded this time last year. (Photo: KHL)

These were the days before the energy crisis had taken grip, the start of the war in Ukraine and rocketing inflation.

There was a view that with Covid becoming less of a hindrance, the only real issue was the supply chain, which could be worked out over time.

This is reflected somewhat by the combined views of the rental companies, manufacturers and end users who took part, when asked what their prospects were for the year ahead.

As always, there is a mixed response, as this is a global survey, yet 17% are expecting no growth, compared to 10% of those that responded this time last year.

Almost double the amount of rental companies forecast no growth in 2023, compared to those that took part this time last year. (Photo: KHL)

Further to that fewer companies are expecting growth in 2023 and more are looking at drops.

Zero percent expected up to 10% percent decline a year, compared to 11% in this year’s survey.

However, a higher percentage of rental companies are looking to purchase new machines next year than they were a year ago, and fewer are expecting to invest in used equipment. 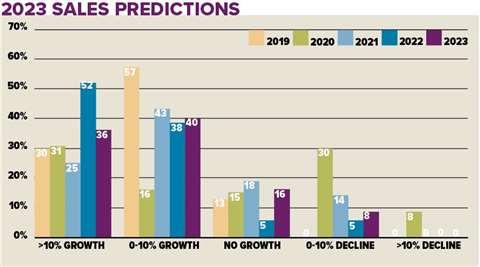 Perhaps this is a sure sign that once the supply chain eases, there will be a move to make up lost ground in introducing new kit to their fleets.

The manufacturers overall also see less growth next year and more declines in their sales predictions for next year, while forecasted production levels are somewhat mixed.

The more than 10% increase in production levels that was expected to occur this year with the hope that the supply chain would work itself out by now, were dashed. In this year’s survey respondents are much more cautious about next year.

How will rental rates change in 2023? 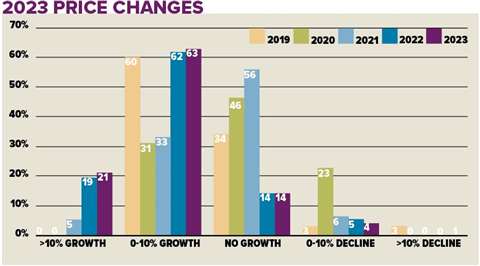 Predicted price changes for 2023, as seen by respondents to the Access confidence survey. (Photo: KHL)

Overall those who took part this year are also more conservative in their view of rental rates over the next 12 months.

Again, the global picture is mixed but overall there is less excitement for the market and a more cautious approach to the business conditions next year.

A general view in the comments that we have received from those who took part in the survey, is that the current market is good.

This is despite the challenges, but a slowdown is inevitable due to the promise of recession in many parts of the world.

Some point to the increasing difficulty in acquiring decent finance next year and in general sound a word of caution. 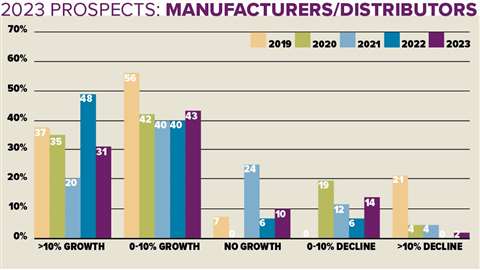 Predicted growth for 2023 for rental and access manufacturers. (Photo: KHL)

Compared to this time last year, there has been a shift in mood away from the idea that things can only get better.

Now the realisation is that they could get worse in the foreseeable future.

Nevertheless, the growth opportunities afforded to the access industry in many parts of the world, including emerging nations like China, will mean that the downward trend will be bucked in certain quarters. 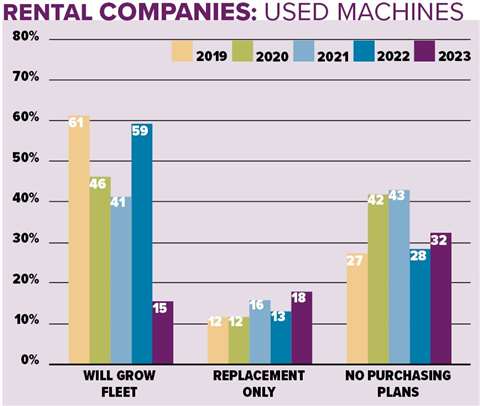 32% of rental companies that responded say they are not planning further purchases next year, while just 15% say they will grow their fleet. (Photo: KHL) 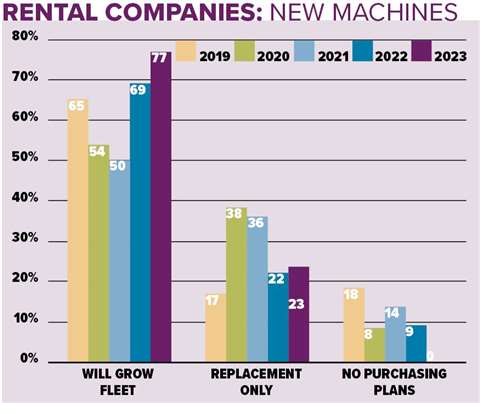 The table shows that the number of rental companies which plan to purchase new equipment has increased from last year, with 77% planning to add new machines to their fleet. (Photo: KHL)